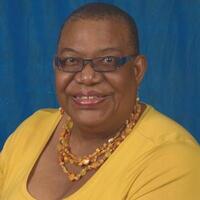 Amoret Ivana Vanterpool, affectionately known to many as Amo, was born on February 22, 1951 on the beautiful island of St. Thomas, U.S. Virgin Islands.  She is the eldest of eleven children born to Charles, Jr. and Enid Vanterpool.  She became the matriarch of her family, after her parents death.

Amoret is a product of the Virgin Islands public school system. She began her education at Commandant Gade and Jane E. Tuitt Elementary School, and concluded as an honor student at Charlotte Amalie High School (CAHS). After giving birth to her daughter, Arnette Georges, Amoret worked as a teacher’s aide at CAHS while earning her GED in 1969. Amoret understood the important role of education to social advancement which led her to make the difficult decision to leave Arnette with her grandmother while she traveled to New York to attend and graduate from the Berkeley Secretarial School in 1971. Shortly thereafter, Amoret brought her daughter to New York, where they resided until 1977 when they returned to St. Thomas and Amoret gave birth to her son, Andrease Orlando Moore, Sr.

Amoret loved working with numbers. While living in New York during the 1970s and 1980s, she worked as a bookkeeper and accounting clerk for various agencies under the auspices of the City of New York as well as the Wildcat Service Corporation. While on St. Thomas,  Amoret continued to serve in the role of bookkeeper, accounting clerk, and credit manager at the Sea Chest, Hyatt Hotel and the Westin Hotel, respectively. In 2000, Amoret relocated to Virginia to assist her daughter who had taken ill. She was immediately hired as an accounting clerk with the Art Institute of Washington, DC. She later accepted a position with the Department of Justice, U.S. Attorney’s Office as a receptionist in 2004. During her tenure with the DOJ, Amoret was promoted several times. She was a paralegal when she retired in 2016.

Amoret was recently asked what is she most proud of? Her response was quick and succinct: “my children; I am proud of all that you have accomplished.” However, it was not Arnette nor Andrease that made her face light up with joy. No, that privilege was reserved for “Peace,” Andrease Moore, II, her grandson.

Amoret lived a full and rewarding life. She never allowed illness or pain to limit her zest for life. She loved living and traveling with her daughter to Hawaii, the Dominican Republic, and California during the previous 19 years. And, she loved every moment of the 2+ years that she lived with Andrease, Tanisha, Peace, Tres, Tru, and Osai. She also enjoyed reading, trivia, cooking and spending time with family and friends.

Amoret was a faithful member of the Jehovah’s Witnesses. She loved God and her faith in Him and the truth of His word never waned.

On Monday, March 14, Amoret transitioned from labor to reward after a short but difficult illness. She was preceded in death by her parents, Charles and Enid Vanterpool; sister, Doris; brothers, Charles, III and Dennis Vanterpool;  and nephew, Ron Rivera.

To order memorial trees or send flowers to the family in memory of Amoret Vanterpool, please visit our flower store.