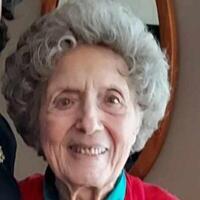 Arcangela Maria Frigiola was born on May 20th, 1922 and passed away on April 25th, 2022. Called Lee by her friends, she was born in New York and married Fred Grieco at the age of 21. They would go on to have four children, seven grandchildren, and three great grandchildren.

Though she would face many hardships from living during the depression and losing a brother at a young age, Lee would become a woman of remarkable compassion. As a girl, she dreamt of becoming a doctor and though she never had the chance to achieve this goal, she spent her life helping others. A woman of strong beliefs and convictions, she also never stopped learning, in her later years; she would quip that she learned something new every day even though she was too old for it. At 99, a week before her death, she was volunteering in a food bank and tying quilts for those in need.

In life, Lee was vibrant. She was always generous, especially to her grandchildren, sometimes to the chagrin of her own children. Ever adventurous, she enjoyed travel and took her grandchildren on cruises around the world; she especially loved the atmosphere of Singapore, following Jesus’s footsteps in Israel, and reconnecting with her heritage in Italy.

Known for her quick wit and infectious smile, Lee had an easy laugh that made her face glow and eyes sparkle. She had a natural charm and could effortlessly turn strangers into friends. While she enjoyed her privacy and independence, Lee truly thrived in the company of others. From her time in the Midwest during WW2 to walking across the city to find work as a teenager, Lee always had a story to tell and a captivated audience.

While she had a limitless capacity of patience and kindness for everyone; her grandchildren were her true joy. Nothing made her happier than spending time with them and being a part of their lives. To anyone fortunate enough to know her, she was an endless source of unconditional love. She always had a kind word to say or provided a shoulder to cry on. There was no one no more devoted or supportive.

Her grandchildren had only one true rival: dessert. Lee could make chocolate disappear in an instant. No cake, no brownie, no pie was safe around her. She also loved Baileys and red wine. During a visit with several of her grandchildren, her face lit up when they presented her with a bottle of Baileys. At 99 she drained a glass, and I will never forget her delighted, impish smile as I poured her another while her daughter’s back was turned.

Lee’s legacy is all the hearts she touched during her rich, full life. To boil such a life down into a few paragraphs means leaving out so much of what made her special. While everyone who has ever met her will have their favorite anecdotes, there are two that speak most to her quality of character; one we were all blessed to have experienced firsthand.

When her granddaughter’s husband was getting his diploma, he had no family to come and witness. This horrified grandma. Without a second’s hesitation, she went to celebrate his achievement and cheered as loudly as her lungs could manage; because everyone should have a grandmother’s support, regardless of blood. She was everyone’s grandma.

In rehab, after a fall, Lee was receiving communion from a priest. The priest noticed her legal name and Lee joked that she was an archangel. This didn’t get the reaction she had been hoping for, so she continued by saying that the archangel Michael wasn’t doing a satisfactory job and that when she got up there, she’d be replacing him and making some changes. The priest retreated to grandma’s raucous laughter. If you notice any reforms in heaven, you’ll need to thank grandma, even if it did put Michael out of work.

Lee found happiness in the smallest of things. A handmade card was worth more to her than gold, a simple phone call more precious than any jewelry. A visit and a home-cooked meal, with some Baileys on the side, was more meaningful to her than anything else. For a woman who washed tinfoil so she could reuse it, value was in people, not possessions. No one could make you feel more loved, more valuable, more at home than grandma. Goodbye grandma, we love you.

Please join the family for a memorial service on May 18th, 2022 at 11:00 AM at St. Paul’s Lutheran Church, 1370 Defense Highway, Gambrills, Maryland followed by light snacks in the fellowship hall.

To order memorial trees or send flowers to the family in memory of Arcangela Grieco, please visit our flower store.