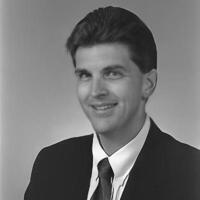 Brian Michael Reimer died January 21, 2022, at his home in Bowie, MD, from complications of
cancer. Brian was born on December 16, 1959, in Cincinnati, Ohio, the fourth of Bob and Joan
Reimer’s five children. He graduated from St. Xavier High School in Cincinnati, then earned his
B.A. in Theology from the University of Notre Dame. He served as a religion teacher in Ann
Arbor, MI, and a youth minister in Valdez, AK, and Bowie, MD. Brian returned to school to earn
his J.D. at the University of Maryland where he was an editor of the law review and a member
of the Order of the Coif. After graduating, he worked as an attorney for the U.S. Postal Service
for more than 30 years before retiring in 2020.
Brian married Patricia Simpson of Bowie, MD, in 1998, and remained devoted to her until his
death. Brian and Trish had two children, Thomas Michael and Joan Cecelia.
Brian was a lifelong sports enthusiast. He attended several World Series games in Riverfront
Stadium to cheer on his beloved Cincinnati Reds in their back-to-back world championships,
and later donated one of his tickets to the Baseball Hall of Fame in Cooperstown, NY. In his
twenties and early thirties, he traveled to every MLB stadium in the US, generally by Greyhound
Bus, to attend at least one professional baseball game at each. He was the student manager of
his high school’s wrestling team, and announced Notre Dame football games at WNDU, the
college radio station at the University of Notre Dame. He continued to serve as an announcer at
high school sporting events in Alaska and Maryland, and most recently announced swim meets
at the Belair Bath and Tennis Club in Bowie, MD, where his children competed.
Brian devoted many hours as a volunteer for the Catholic Church. He served as a lector at
Masses in his youth, then sang in liturgical choirs and taught Confirmation classes. He was
enrolled in the Deaconate program of the Archdiocese of Washington until his health problems
compelled him to withdraw.
Brian threw himself into his hobbies with great passion. He traced his family’s genealogy back
to Europe on both sides, and traveled to Czechoslovakia to visit a church built by his stone
mason ancestors. He was a connoisseur of fine coffee and microbrews, and loved treating his
family and friends to perfect cups of java whenever the occasion arose. After he retired from
the USPS, he took up an interest in fiction writing, and wrote several short stories and plays.
Brian is survived by his wife Trish; his children Tommy and Joan; his siblings Jan Reimer (of
Grand Canyon, AZ), Carol Goett (Bridgewater, NJ), Bob Reimer (Atlanta, GA) and Tracy Neis
(Placentia, CA); and 15 nieces and nephews.
Memorial donations may be made in memory of Brian M. Reimer to:
Saint Anselm’s Abbey School (memo line: Benedictine Learning Center), 4501 South Dakota
Avenue NE, Washington, D.C. 20017; for more information contact Development Coordinator
Kimberly Walhout at 202-281-1653.
or
Georgetown Visitation Preparatory School (memo line: Annual Fund), Development Office,
1524 Thirty-Fifth Street NW, Washington, D.C. 20007-2785; for more information contact the
Development Office at 202-787-5676

To order memorial trees or send flowers to the family in memory of Brian M. Reimer, please visit our flower store.