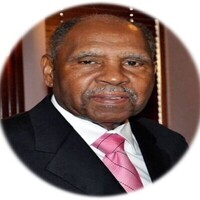 Dennis was born to Dennis Sr. and Ozella Cunningham on March 10, 1939 in Laurens, South Carolina. He graduated from Sanders High School in Laurens, South Carolina. It’s a blessing to know that he accepted Jesus Christ as his Lord and Savior at a young age. In 1958 he married the love of his life, Patricia Ann Pitt (predeceased). Out of this union, seven children were born. He departed this temporary world to be with our Lord on September 16, 2021.

Dennis was taught how to sew from his mother.  With that skill, he went on to work at an upholstery shop and learned how to upholster furniture, cars and boats.  He had a vision to be his own boss.  Several years later, he partnered with a friend and became an entrepreneur when the two of them started a business in Maryland which they named “Central Auto Upholstery.” A year into the business, his partner left and he became the Sole Proprietor; keeping the business running for over 35 years.  Dennis was well respected by the community and his work garnered him several contracts with businesses such as: Ourisman Chevrolet, Tolson Buick, Coca Cola, Hertz, and Pepsi Cola.  Through word of mouth about his outstanding work, he was additionally contracted to do aircrafts as well.  His children knew when he was home because they could hear him singing; coming in the door in the evenings, wearing his blue jumpsuit and briefcase in hand.

Dennis told his children he prayed and said he did not want his wife to work, but to stay at home, raise the children, and take care of the home.  He could remember how his father, mother and sisters had to pick cotton in the fields and was never able to make ends meet, which is what helped him remain focused.  Because of that, he was dedicated to working every day and providing for his family.  When he decided to retire in 1998, he and Patricia moved to Florida where he enjoyed the beautiful sunshine, fishing and just relaxing.  They eventually moved back to Maryland to be closer to family.

One thing all his children knew for sure, was that Dennis loved playing his guitar and listening to quartet music for hours.  One of his favorite songs was “All Things Are Possible” by the Harmonizing Four.  He also enjoyed using his hands to work on model cars, as well as building and fixing things around the house.

Dennis was a Deacon and Chairman of the Deacon Ministry at Prayer Mission Church.  Later he served as Head Usher at Evangel Church in Largo, MD. He was ordained a Minister in 1989 at Royal Oak Pentecostal Church in Landover, MD.  From there, he served his final days of ministry as an Elder of the Pastoral Ministry at Hear The Word Bible Church in Bowie, MD where his son, Dr. Thomas Eugene Cunningham, is the Pastor. He was also Leader of the Wisdom Walkers ministry and faithfully attended Sunday worship service and Bible Study. He was one who was always in the service of others and a man of unshakeable conviction.

Dennis crossed over into the arms of the Lord a well-loved and special man; revered by many. He had several friends who loved him at the community complex where he lived.  He will fondly be remembered by family and friends as a loving father, a great man of God, and one who always encouraged others.

To order memorial trees or send flowers to the family in memory of Dennis Cunningham, Jr., please visit our flower store.