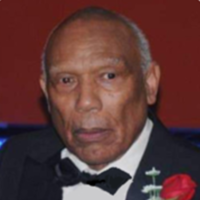 There is a season and purpose for everything under the heavens.

A time to be Born: Edward Harris was born in January 1935, to the late James Edward Harris and Annie Adams.  His brother, Herman Harris, preceded him in death.

A Time to Die: Edward peacefully transitioned from this life in the early morning of Saturday, May 22, 2021 surrounded by his loving wife and children. He told his family, “I am at peace.”

A Time to Sow: Educated in the Marvel, Alabama public schools, Edward learned early the value of education, service and fortitude. He knew a military career would be his segue to the "American Dream,'' and after graduating from Alabama A & M University where he obtained a Bachelor of Science in Agricultural Education, he enlisted in the United States Army. There he served honorably as an Army Artillery Survey Specialist.

A Time to Reap: Edward believed in hard work and perseverance and for more than three decades he served as a civil servant.  He was employed as a County Extension Agent with Auburn University Extension Services, a Rural Development Officer, and served prestigiously on assignment in South Korea for the U.S. Department of State.  He retired from the U. S. Department of Agriculture as a Staff Assistant to the Director, Eastern Region, Agricultural Stabilization, and Conservation Service (ASCS) in Washington, DC.

A Time to Love: For more than sixty years Edward was married to his forever love, Anna Lois.  From this union their children Beverly, Angela, Eric and Michael continue to foster a tradition of posterity and generational substance. After retiring from his career with the Federal Government, he remained active pursuing his passion as an independent contractor concentrating on home remodeling and improvement. He was an avid viewer of CNN, MSNBC, PBS, and local news media and was known to    debate on all topics of national, historical, and international significance. Edward was a lifelong member of Turner Memorial African Methodist Episcopal (AME) Church in Hyattsville, Maryland.  Known for his resounding tenor voice, he sang with the Men’s Choir and the Senior Choir. He was active in Toastmasters and was also a master gardener who tended to an abundant fruit and vegetable garden for as long as he was able. A gentle giant, Edward Harris had a warm spirit and genuine passion for helping others.

In lieu of flowers the family requests that donations be made in the name of Edward Harris to organizations supporting youth exposure to the performing arts:
https://www.stevenmallen.com/dunbaroperasfundinc
http://www.dcnanm.org/
https://www.capitalbop.com/donate/
https://donate.bgca.org/
To order memorial trees or send flowers to the family in memory of Edward Harris, please visit our flower store.