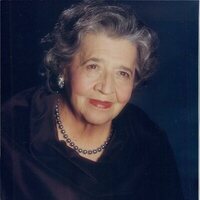 Eftihia (Effie) Karavasilis of Baltimore, Maryland went to be with the Lord on
Tuesday, August 3, 2021 at the age of 95 at home, surrounded by her family.

Effie was preceded in death by her beloved husband Mike (Marcos) of 43 years.

HISTORIC
Effie was the daughter of Athanasios and Ekaterini Protopapas of Perahora, Corinthia, Greece.She was one of seven siblings and has one surviving brother, Tony Protopapas with wife Sophia, of Tarpon Springs, Florida.Effie, also has many nieces and nephews in Greece, Canada, Baltimore and Florida.

As a young girl, she experienced the hardships that resulted from WWI, WWII, the occupation of Greece and the life challenges that came thereafter. She was stricken with a life-threatening infection and was one of the very first recipients of Dr. Alexander Flemmings's new discovery of penicillin, which was administered to her in the 1930's, in Athens Greece, and saved her life.When Dr. Flemmings wife, Amalia Flemming, visited Baltimore during the celebration of the 75th Anniversary of the Cathedral of the Annunciation in 1981, Effie was able to meet with her and Father Monios, to thank her personally for what her husband did for her as a child. Effie was a valiant survivor and had a bold, courageous spirit that carried her through her entire life, both as a homemaker and entrepreneurial partner with her husband Mike.

Effie loved attending school in Greece and had an amazing memory. She could recite poems and songs from her youth even until her last days that she would entertain the family with. Songs that most of us would have long forgotten.Effie was part of the Karandani family who owned the mineral springs of Loutraki, Greece, known throughout Europe for their miraculous healing properties. She helped her aunt during the summers by working at the family's spring/resort.

As a young lady, she was immensely talented, loved, and learned everything needed to become a seamstress, and designer  of clothing without a pattern, which after immigrating to Canada helped secure her position at Simpson's Department store in London, Ontario.With these multiple creative talents and ingenuity, she made sure her family were always well dressed in handmade outfits made with her sewing machine.

Effie fell in love with Markos, her husband to be, that served in the Royal Palace of HM King Paul of Greece as the driver to the King and his family.

They were married in April of 1951 and in the winter of 1952, they boarded a ship named  the MV ITALIA that was previously used as a troop carrier that took part in the invasion of Normandy on D-Day in 1944, leaving Greece from the port city of Patra with their three-month-old son Alexander, crossing the North Atlantic, and landing in Halifax, Nova Scotia Canada, on January 21st of 1952.

Effie and her husband Mike embraced their new land of opportunity, became members of the Holy Trinity Greek Orthodox Church, in London Ontario, learned the English language and became citizens.  They worked very hard and started several successful businesses, one of which included the original world-famous Stork Club - North Americas Largest Ballroom, at Port Stanley Beach, southern Ontario's Coney Island, a venue well known for the best international entertainment lineups of its day. The entire extended family worked it together, including aunts, uncles, nieces, and nephews.

In 1972, after scaling down business, Effie, Mike and her family made the move to Baltimore, Maryland in order to be close to family and open a new business known as The Wedding Belle, in Highlandtown that specialized in essentials  for the Greek Orthodox Community needed for the sacraments of the church, as well as other diverse wedding-related products needed by all kinds of customers.

Effie was the heart of her family. Her home was the center of all things family. She not only nurtured her children, but she nurtured the lives of her grandchildren and great-grandchildren. Effie was so tenacious and strong, even insisting on cutting her own grass, gardening, and tending to the figs and grape arbors until she was 90 years old.Effie, will be forever loved and remembered by all who had ever known her.Ζωη σε σας   “ For I am persuaded that neither death, nor life, nor angels, nor principalities, not powers, nor things present, nor things to come, nor height, nor depth, not any other creature shall be able to separate us from the love of God, which is in Christ Jesus, our Lord. “

Funeral service commences at 12 o'clock.Interment to follow at the Greek Orthodox Cemetery.

In lieu of flowers, donations may be made in Effie's memory to:

To order memorial trees or send flowers to the family in memory of Effie Karavasilis, please visit our flower store.

Chapel of the Holy Resurrection in the Greek Orthodox Cemetery

Chapel of the Holy Resurrection in the Greek Orthodox Cemetery