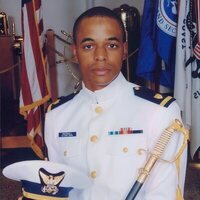 Eric Sherard Marshall, loving husband, son, brother, uncle, and friend to so many passed away at the age of 36 on Saturday, January 2, 2021.

Eric was born June 23, 1984 in Jackson Mississippi.  He is the son of Samuel and Dinah Slay, Sr.  Moving to Maryland, Eric attended Bowie High School where he was a standout football player. Eric was ambitious and attended Bowie State University where he earned a Bachelor of Science degree in Computer Technology in 2006.

Eric proudly served active duty in the United States Coast Guard from 2004 to 2016.  His exceptional leadership and superior ability led to his selection to the Coast Guard Officer Candidate School in New London, Connecticut.  After many weeks of rigorous study and grueling exercises, Eric was commissioned a Coast Guard Officer.  Throughout his distinguished military career, Eric earned several awards including the Global War on Terrorism Service Medal and the Coast Guard Unit Commendation Ribbon with a Gold Star. Eric moved up the ranks and was promoted to lieutenant. Following his active duty, he continued serving in the U.S. Coast Guard Reserve.  Eric continued to live by the principles set forth by the Coast Guard as he embarked upon his law enforcement career. In 2016, Eric joined the United States Capitol Police.  As a 4-year veteran of the department, he was recognized by his colleagues for his kindness and integrity.

Eric was known for his infectious smile, easy-going personality, and generous spirit.  He had many passions, some of which included traveling, watching San Francisco 49ers football, but most of all, spending time with his family.  Eric was a kind and loving partner to his wife Raven, as well as an amazing father to his children Ayden and Aubrey. The simplest pleasures in life brought great joy to Eric. You could find him spending countless hours playing video games with his kids.  Eric also loved date nights with his wife, playing cards with his friends, and working out in his free time.

Eric was preceded in death by his brother Skylar Slay.

He leaves to cherish his memory his loving and devoted wife, Raven; his son, Ayden (8-years-old); his daughter, Aubrey (5-years-old); his parents, Samuel and Dinah Slay, Sr.; his grandparents, Eugene and Elsie Marshall; his father-in-law, Jocquin Thomas (Cleo); his brother, Samuel Slay, Jr. (Monica); his sister, Christie Slay; his nieces, Sa'Mya Slay and Sa'Mari Slay; and his nephew, Samuel Slay III; and a host of other family members and friends.

To order memorial trees or send flowers to the family in memory of Eric Sherard Marshall, please visit our flower store.