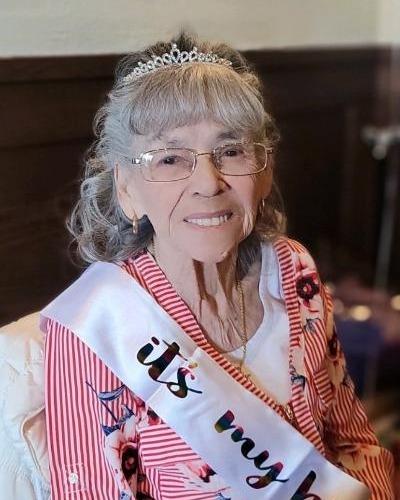 Aida Luz Alicea DeJesus was born on May 8, 1928, in Humacao, Puerto Rico.  She was the only child to Juanita and Manuel Alicea.  Aida was faced with many obstacles growing up. She lost her mother at a very young age, faced financial hardships, and was forced to give up her education for the demands of physical labor.   Despite her struggles, she developed a passion for cooking and used food as a form of expression throughout her life.   With the help of her extended family, she left Puerto Rico and moved to New York, NY for a better life.

Aida had a vision, she wanted to have a life of her own, be happy and raise her children so she can ensure her they would have the life she did not have.  She married Hector D. Alejandro and had two sons, Hector Alejandro, and Juan “Johnny” Rivera. A few years later, she met Luis Morales and had her only daughter, Gloria Romero. Despite becoming a single mother, that did not deter her tireless efforts of ensuring her children were going to have the best life.   She instilled the importance of family, education, placing God first and teaching them to treat others the way they wanted to be treated. In 1960, she met the love of her life, Manuel DeJesus, also known as Papi Manuel.   Together, they continued raising all three children to adulthood.  She also adopted and raised her son Michael Acosta.

She was everyone’s Abuelita, not just to her biological grandchildren, but to every person she met.  She accepted everyone equally, and expressed this by ensuring every person that walked into her home was fed.  She saw the good in every person she met.  She was kind, compassionate, loving, honest and faithful.  She never forgot a birthday, a party or celebration and always made sure of your well-being over her own.  She was charismatic, her personality lit every room she entered.  Her smile was infectious.  She made an impact on everyone she met.   Within 5 minutes of meeting her, you were considered a family friend for life.  She was funny, an undiscovered comedian at heart.  She had impeccable timing. Just when you thought she didn’t understand, she would blurt out a phrase, and light up the room in laughter. She loved fashion, she was a fashionista at heart.  She had a sense of style all her own and it showed from her head to her feet. She was wise despite her limited education.  She referred to her life experiences as examples when giving out motherly advise.  She was resilient, protective, and humble.

Aida Luz DeJesus’s name is exactly what it meant “Gifted Light of Jesus.” She made an overwhelming impact in this world.  She gave so much and required so little.  She will be terribly missed, but her memories will live on in every person that knew her. She is survived by her sons Hector and Michael, her daughter Gloria, seven grandchildren and six great grandchildren.

To order memorial trees or send flowers to the family in memory of Aida L. DeJesus, please visit our flower store.