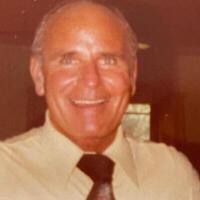 Lt. Colonel John T. Emmerich (Retired) USAF from Bowie, Maryland was born September 7, 1930 in Brooklyn, NY.  On August 18, 2022, while surrounded by his loving children, Mr. Emmerich passed away at home due to natural causes.
Lt. Col. Emmerich is predeceased by his beautiful wife, Eva C. Emmerich, his son Stephen “Steve” Emmerich, his parents, Henry and Ann Emmerich and his sister Patricia Amann. Mr. Emmerich served as both mother and father while raising his 5 children. He is survived by three sons, Lawrence “Larry” Emmerich, John “Johnny” Emmerich, Scott Emmerich, Colleen Thomas his only daughter, his brother Henry Emmerich, 12 grandchildren, 8 great-grandchildren and many other family members.
Mr. Emmerich, known for his selfless generosity and strong faith was a member of St. Pius Catholic church in Bowie, Md, but frequently attended Sacred Heart Catholic Church, also in Bowie. Lt. Col. Emmerich is a graduate of Fordham University and R.O.T.C training at Syracuse University. Fluent in Russian, he worked for the National Security Agency, (N.S.A, FT. Meade, Md.). Following his 20 years of service, he became President/Treasurer of the International Brotherhood of Firemen and Oilers, (Local 63). After he retired, his focus was on family and he never stopped instilling faith, love, courage and morals in his children and grandchildren. He enjoyed singing and occasionally playing the piano. He loved to talk and he was known for his exceptional public speaking ability, often doing so professionally extemporaneously with no notes or preparation.
“John” was an example to all who were blessed to have known him and he will be dearly missed. Funeral Arrangements are provided by Beall Funeral Home in Bowie, Md. Mass will be held at Sacred Heart Catholic Church (chapel), 16501 Annapolis Rd., Bowie, Md., on Wednesday, September 7, 2022, at 11:00 am. Due to covid, Interment at Arlington National Cemetery with full Military Honors could be delayed for up to a year. Family will be contacted when we have a date.

To order memorial trees or send flowers to the family in memory of John T. Emmerich, please visit our flower store.