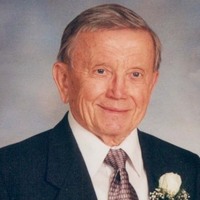 John Joseph Gazda was born on January 29, 1923 and passed peacefully in his sleep on December 30, 2021.  John was born in Szufnarowa, Poland and immigrated to the United States at the age of 11 with his parents Joseph and Mary, sister Stella, and brother Walter.  While growing up in Philadelphia, he shined shoes, sold pretzels, and helped with his father’s business; anything to help his family.  After graduating from high school, he worked as an electrician’s helper at the Chester Navy Shipyard.  He served in the U.S. Army during World War II and earned several qualifications, including pharmacist technician.  After the war, he attended the University of Maryland School of Pharmacy and after graduation, began a long career as a Registered Pharmacist.

He married the love of his life Teresa “Terry” from Tramore, Ireland in 1957.  The couple settled in Bowie, Maryland in 1962 and raised two children, Colleen and Joseph.  John worked at People’s Drugstore, which later became CVS Pharmacy, for most of his career.  True to his hardworking nature, he took on an additional part-time job at Deale Pharmacy for many years.  He retired from CVS in 1988 but continued working at Deale for several more years.

A devote Catholic, John was very active in the St. Pius X Church and the Knights of Columbus.  He often volunteered his services and served as an usher at the earliest Sunday morning mass for several decades.  He loved the camaraderie of the Knights and was a longstanding member of its Young/Old Retired Club (YORC).

John’s favorite activity was spending time with immediate and extended family.  He loved to tell stories about his childhood in Poland and Philadelphia, times in the Army and other experiences.  He was known to sprinkle in a few jokes among his stories.  He loved to travel, take day trips, or just go for a ride with his wife and other family members.  Over the years, he enjoyed outings coordinated by the Bowie Senior Center.  His love of music started as a young boy when he played the violin and appreciated classical Mozart music.  However, of late, John’s favorite song was Margaritaville by Jimmy Buffett.  He liked to tinker with things and spent hours on his computer and cell phone.  He enjoyed the ocean and always was the first to point out the beautiful blue sky.  He was a longtime Baltimore Orioles fan, sticking with them through thick and thin.

John is survived by his wife, Teresa, and his sister, Stella Turowski.  He is also survived by his daughter and son-in-law Colleen and Timothy O’Hara, his son and daughter-in-law Joseph and Deanna Gazda, grandchildren Christine Puhl, James Gazda and wife Briana, Emily Gazda, and Kathryn O’Hara.  He also leaves numerous extended family members in the greater Philadelphia area, Poland, and Ireland.

John is predeceased by his parents, Joseph and Mary Gazda, his brother Walter and wife Delores, and his brother-in-law Matthew Turowski.

In lieu of flowers donations can be made in memory of Mr. John Gazda to St. Pius X Catholic Church.

To order memorial trees or send flowers to the family in memory of John Joseph Gazda, please visit our flower store.