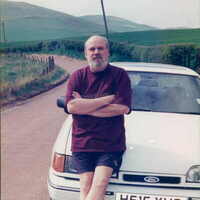 John Rouse, Sr.died on October 17, 2021, passing peacefully in his sleep at his home in Bowie, Maryland. He was 79. During John's 36-year career in the newspaper business, he rose to become the editor of the Bowie Blade News. Under John's leadership the Bowie Blade News earned numerous recognitions, among them the Newspaper of the Year award in 1999 from the SEQ Chapter of the Maryland – Delaware District of Columbia Press Association.  The paper also won the Best in Show for several investigative pieces over the years as well as for newspaper design.  John was an avid ham radio enthusiast and his involvement with ham radio took him all over the world.

John Leonard Rouse was born in Cambridge, Massachusetts on September 27, 1942. His family moved to Connecticut at the age of twelve. He built his first radio in his basement as a child, and was interested in short wave radio, antennas, ham radio, and CB radio.

He entered the U.S. Air Force on June 26, 1961 as an Information Specialist where his main job responsibilities were in military intelligence.  He served overseas at Kirknewton base outside Edinburgh, Scotland where he met his wife, Eleanor Skedd. They married in 1963 and had a son John Leonard Rouse in Scotland. John received an honorable discharge from the Air Force and they returned to the United States in 1966 to Wallingford, Connecticut where he started his second career in journalism.  The family moved to Maryland and settled in Bowie on Bartlett Lane in 1972.

John loved to explore the world. Through his writing career as well as through his associations with ham radio societies, he traveled to South Africa, Anguilla and Germany.

John was a longtime member of the Society of Professional Journalists (Sigma Delta Chi) and was a lifetime member of both the Disabled American Veterans and the American Legion.  John also was on Bowie public access television with a regularly appearing cable show  Bowie News and Views. Among John's most admired qualities was his keen sense of humor. Known as an equal opportunity satirist, he adeptly used the power of the writer's pen to make his sound and insightful observations. He had friends in government and politics throughout Bowie, the state capitol in Annapolis and in Washington, D.C.

John was predeceased by his son, John Leonard Rouse Jr.. He is mourned by his wife, Eleanor S. Rouse, and his loving extended family in his beloved Scotland.

To order memorial trees or send flowers to the family in memory of John L. Rouse, Sr., please visit our flower store.