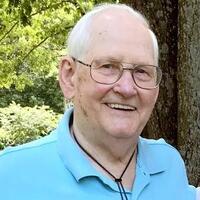 In lieu of flowers, please donate to your the charity of your choice.

John R. Smithson
September 28, 1934 – January 8, 2022
John was surrounded by his family and friends, and passed away on Saturday, January 8, 2022 at the age of 87.
John will be lovingly remembered by his wife, Joyce A. Smithson of  61 years;
daughter, Mary Fisher; son-in-law, Daren Fisher; grandchildren, Sienna Haynes,
Austin Fisher, Logan Fisher; sister, Jane Washburn; brother-in-law, Mike Washburn;
sister, Linda Hamilton; brother-in-law, Jerry Hamilton; sister, Ruth Ross, sister-in-law,
Sharon Smithson; his nieces and nephews, other family and friends from First Baptist
Church of Crofton
John was preceded in death by his father, Ransom Smithson; mother, Esther Smithson;
brother, David Smithson; and brother-in-law, Bob Ross
Personal Life
John was born in a house by the railroad track in Dudley Illinois. His mother, Esther and his father, Ransom were born in Tennessee, and his dad was a farmhand until they rented a farm on the Prairie the next year. He went to a one room schoolhouse about a mile from his house. He either walked, rode his bicycle or his pony named Tony. Tony was not broken when his dad bought him, and they learned to ride together. They moved to Ridgefarm Illinois in 1943, and his parents bought a farm Near Vermilion Illinois in 1944. John attended High school at Paris High school from 1948 to 1952, and during his junior year he joined the naval reserve In Terra Haute, Indiana.
In the fall of 1952, John requested active duty with the Navy and went into the Great Lakes training center. From the Great Lakes training center, John went to Aviation Machinist Mate school at Norman Oklahoma and from there to Bainbridge naval training center where he attended the Naval Academy Preparatory School (NAPS). He was accepted into the Naval Academy but chose a discharge. In June 1954, John attended the University of Maryland with a major in Electrical Engineering, and the following year he was employed by the Social Security Administration (SSA).
John married Joyce Kirk on October 1, 1960, and moved to Dayton Ohio in 1962 for a job with National Cash Register (NCR) company. In 1964, they moved to Bethesda Maryland so that he could manage the (NCR) data center in Bethesda. In May 1964 to June 1965, John became Director, Customer Relations and Support, for Ernest E. Blanche and Associate. John received a Bachelor of General Studies from University of Maryland (1964); Master of Governmental Administration from George Washington University (1966)
In 1970, John and his wife, Joyce, moved to Tucker Georgia near Atlanta as Manager, Technical Support, Management Science America (MSA). In 1970 they adopted their daughter, Mary in Atlanta GA. In 1972 they moved back to the Baltimore area and John rejoined the (SSA). In September 1979, John moved to the Health Care Financing Agency.
In 1995 John went to China for over 40 days to teach the Bible to students as a missionary. He retired from the federal government as a Senior Systems Analyst in January 2003. John's granddaughter, Sienna, was born in 2008, and grandsons, Austin and Logan, joined the family in 2013. John loved to play checkers as a boy, and he taught his granddaughter to play checkers and chess. He loved to read the Bible, study archeology, study philosophy, watch cowboy movies, listen to country music, and old gospel songs. John was a third degree Mason; had single engine pilot’s license; post office clerk at University of MD; Taxi cab driver in Baltimore; had his lay preachers license with Methodist Church; was a Sunday school Superintendent; taught Sunday school classes; deacon at First Baptist Church of Crofton and chairman of deacons at Severna Park Baptist Church; computer programming instructor; real estate sales agent; Licensed life and health insurance agent. He will be greatly missed by all who knew him.
Funeral Service is on Thursday January 20th at noon and will be at 12:00 pm First Baptist Church of Crofton 1690 Crofton Parkway Crofton,  MD.
Burial will be at Crownsville Veterans Cemetery 1122 Sunrise Beach Road Crownsville, MD. at 1:45 Thursday 20th following the funeral service.
The Smithson family wishes for any memorial contributions to be made to the MDS Cancer foundation https://www.mds-foundation.org/donate/, or a charity of your choice as an expression of sympathy instead of flowers for John.
To order memorial trees or send flowers to the family in memory of John R. Smithson, please visit our flower store.