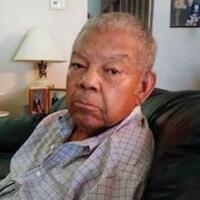 Lawrence W. Butler was born September 28, 1929 to the late Lucas and Geneva (Gordon) Butler of Dameron, MD. He was the first born of 7 children and attended school in the St. Mary's County school system until he joined the military (Army/Aircorps).  He then completed 22 years in the Air Force.  Lawrence then retired from the military in 1969 moving in with his late wife Thelma (Robinson) Butler with their 3 children, Andrya, Portia, and Lawrence Jr. to Bowie, MD.

Also known as "B", Butler, Larry, Uncle Butler, Junior and Pop-Pop, Lawrence began a second career with Giant Foods Inc. as a meat cutter where he stayed for 20 years.  Upon retirement from Giant, he and wife Thelma traveled.

Being a member of St. Pius X and the Knights of Columbus Lawrence became a Grand Knight during his membership.

To order memorial trees or send flowers to the family in memory of Lawrence William Butler, Sr., please visit our flower store.