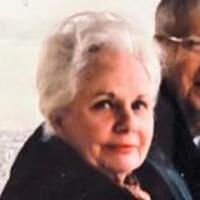 Mary Adair Johnson, age 91, passed away on April 20, 2022, at her residence in Bowie, MD. She was a remarkable, intelligent, and beautiful woman. She was born in Paris, France on November 10, 1930, to Donnell Adair Brown and Nelle Wick Brown. They lived in Paris for about 2 years, then moved to Shreveport, Louisiana, where she grew up. She graduated from Centenary College in 1950 and met the love of her life, Donald Lewis Johnson, in 1952, at church choir practice. They married on April 6, 1953, and eventually settled in Dallas, Texas, where they started their family. Their marriage lasted nearly 63 years—until Don’s death in 2015.

Mary Adair loved to travel and lived overseas for many years. Mary Adair, Don, and their young family lived briefly in Campinas, Brazil in the early 1970s. Later she, Don, and their youngest son lived in Strasbourg and Paris, France, returning home to Texas in 1987. In 1996, Mary Adair and Don fulfilled their lifetime dream of retiring in Paris, France. Throughout retirement she and her husband traveled extensively in Europe and the Middle East. Together they were very active with the Association of Americans Resident Overseas, the American Cathedral in Paris, and Les Arts George V, an organization that hosts musical performances from all over the world at the American Cathedral in Paris. Mary Adair had many other interests as well, including investing, music, art, history, and politics, and she was always up for a lively discussion of current events.

A Celebration of Life will be held for Mary Adair at 1:00 pm on Friday, April 29, 2022, at Tribute at Melford, 17300 Melford Boulevard, Bowie, MD. Reverend Robyn Franklin-Vaughn will officiate. All are welcome; please bring your vaccine card to present when checking in.

In lieu of flowers, donations may be made to the American Brain Foundation at https://www.americanbrainfoundation.org/.

To order memorial trees or send flowers to the family in memory of Mary Adair Johnson, please visit our flower store.