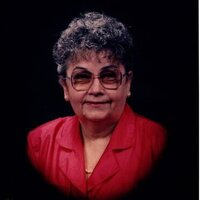 Nettie was born in San Juan, Puerto Rico on May 18, 1930, to university professors at the University of Puerto Rico at San Juan, where she attended and met her husband Francis Wilson. He joined the military and they enjoyed the travel which came with his assignments. An assignment in Italy allowed vacations in the Alps and across southern France to Spain. Assignments in the United States, including Hawaii allowed travel to over 20 states.

The family settled in Bowie, MD when Francis Wilson died. There Nettie met and in time married William Gilpin. The integrated family grew up, moved out to start their own lives. Nettie remained in that house for 50 years. Her son Rich moved back in and provided her the care she needed as she aged.

Nettie died knowing she loved and was loved. She knew she was going to a place specially prepared for her by her Lord and Savior. She knew she would see us all again in eternity.

To order memorial trees or send flowers to the family in memory of Nettie R. Gilpin, please visit our flower store.