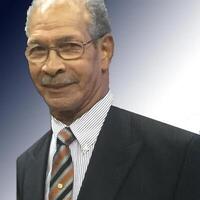 Please click here to view the live stream of the funeral service. The live stream of the funeral service for Mr. Rufus Jimason, Jr. will begin at 11:00am on Friday the 26th of November.
Rufus Jimason, Jr., a retired HVAC professional and native Washingtonian died unexpectedly on Tuesday, November 16, 2021 at age 82.  He was born on March 6, 1939, in Washington, DC to the late Rufus Jimason, Sr. and Fannie Mae Smarr Jimason; he was the eldest of nine children.
Rufus, affectionately known as “Butch” to family and many friends and loved ones, received his early childhood training and education through the Washington, DC school system where he attended Phelps Vocational High School.  Always a hard worker, Butch started working at a very young age to help support his parents and siblings.  He worked various jobs to include construction, and for a time he delivered milk for Thompsons’ Dairy.  In the early 1960s, he was drafted into the United States Army and for a period was stationed in Korea.  Shortly after leaving the military, he worked for Safeway, Inc. and while working at Safeway, Butch received his Heating, Ventilation and Air Conditioning (HVAC) certification and license from the National Association of Power Engineers (NAPE) and as a HVAC Engineer, he truly found his career calling.  Butch could do just about anything and was often called on by his siblings, family, and others to help repair their heating and air conditioning systems.
On June 22, 1963, Butch was united in marriage to his love, Tecora Bussie, and out of that union they were blessed with three children, David, Cecilia, and Cheryl; two grandchildren, Janelle, and Nina and one great-granddaughter, Marley. He enjoyed being outdoors, fishing and gardening.  He really enjoyed being on the water fishing with his brothers and friends, sharing laughs, and the highs and lows of his beloved “Washington Redskins” (Washington Football Team).  He also enjoyed working in his yard and would spend hours mowing the lawn and ensuring that the landscaping was perfect.  A devoted family man, Butch had a strong sense of family, and it was that devotion that led him to reflect on his spiritual life.  There were questions he wanted answers to, so he started studying the bible with Jehovah’s Witnesses and dedicated his life by means of baptism in 2005.
Rufus is survived by his children David, Cecilia, and Cheryl, granddaughters Janelle and Nina and great-granddaughter, Marley. He is also survived by his siblings, Joseph, Reginald “Reggie” (Retta), Joanne “Chiang,” Nathaniel “Squeaky” (Rita), Jerome “Nutty” (Lynn), Burnetta and Sandra “Punkin” along with a host of nieces, nephews, cousins, and other relatives who loved him.  He is predeceased by his beloved wife Tecora, who passed away on November 28, 2020, his sister Barbara and brother David.
Butch was loved by many and will be deeply missed by family, friends and all who knew him.
To order memorial trees or send flowers to the family in memory of Rufus Jimason, Jr., please visit our flower store.