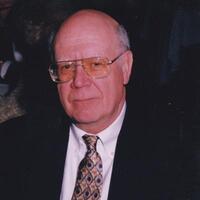 He was born 29 July 1939, and raised in Provo, Utah; attended Provo High School and lettered in tennis; graduated from the University of Utah with a B.S. Electrical Engineering degree, and entered Air Force service on March 291963. Retired after 20+ years' service. Subsequently, he became the Vice President of Anchor, a position which he held until his final retirement in July 2007.

While attending the University of Utah, he was an active Brother in the Sigma Nu fraternity with different leadership positions, engaged in Duplicate Bridge and amassed four Master Points. He also was active in many Intramural sports such as, softball, basketball, football (flag), tennis, and golf.

During his Air Force career, he held various engineering and management positions within the Air Force Systems Command (AFSC), achieved a M. S. Systems Management Degree from the Air Force Institute Of Technology, worked in the Assistant for Processer and Software Planning at HQ AFSC, attended the Program Managers Course at Defense Systems Management College (DSMC), and finished with a five year stint in HQUSAF at the Pentagon.

In his years in the Air Force he traveled extensively to many Air Force sites in the USA, Europe, and Turkey. He was assigned to the Air Force Site Activation Task Force (SATAF), initially at Wiesbaden, Germany, and then at Ankara, Turkey. Accompanied by Lorraine, they traveled extensively through Europe and Turkey, including visits to Vollendam and Amsterdam in the Netherlands, many cities in Germany, including West and East Berlin, Interlaken Switzerland, Vienna Austria, Rome and Naples in Italy, Athens Greece, and Istanbul, Ankara, Izmir, and Adana in Turkey. Managed to squeeze in a short trip to Madrid, Spain. As part of his duties, Chuck also spent many trips to all the communications sites in Turkey to test and accept communication upgrades.

After graduation from the AFIT program, he was assigned to the Over-the-horizon (0TH) Radar Program Office, to manage the software elements of three 0TH radar systems. Subsequently, he was recruited by HQ AFSC to create a requirements document for Air Force management of computer resource elements of major defense systems. He organized and led an Air Force Team comprised of 50+ Officer, Civilian, and Enlisted personnel for this pioneering effort which resulted in an initial Air Force Regulation, AFR 800-14, Volume 11, dated September 1975, subsequently updated. The requirement elements of this document were copied by the Army Materiel Command (AMC), and published as AMCR 70-16. The initial document was also translated to the language, Kanji, for use by the Japanese Self Defense Forces. During his assignment, he also created a five-year plan for AFSC's research and development efforts, titled the Computer Resource Technology, Engineering, and Management Plan (CORE-TEMP). One result of this plan was the contracted development of three guidebook series of 12 volumes each for computer resources management, one for ground-based communication systems, one for airborne and crew trainer systems, and one for missile and space related systems.

After graduation from DSMC, he was assigned to the Program Integration Directorate (ROX) within the Air Staff. In addition to his normal responsibilities, he served as the Senior DCS/RD representative to the Air Staff Data Automation Panel and was a member of the Air Force Budget Issues Team. He was chartered by Major General Jasper Welch to create a select team to act as the entrepreneurial research and development agent for identifying ways of exploiting computer technology.

He retired from the Air Force in 1983 and was employed by CACI Inc - Federal, where he led their work for the Army's Armament Software Engineering Center in the creation of a standard and handbook for acquisition and support of their Software Engineering Environments. This effort resulted in MIL-STD- 1467(AR) and MIL-HDBK-785, both titled "Software Engineering Environments". As part of his efforts he supported the initial phase of the Air Force Bold Stroke program to educate General Officer and SES Civilians to major problems related to automating elements of major defense systems. After leaving CACI, he was employed as the Vice President of Anchor Software Management, Ltd, a position he held until his retirement.

While employed at Anchor, he managed the Anchor team support efforts for the Army Armament Software Engineering Center. Served as contractor co-leader for the Center's Configuration Management and Quality Assurance Teams. Created a five-year Process Improvement Plan for the Center and assisted with its implementation. Created a Configuration Management Manual (CMOP) and many various process and improvement checklists to assist the Center's successful efforts to achieve Level 5 of the coveted Software Engineering lnstitute's (SEI) Integrated Capability Maturity Model (CMMI).

He was also awarded the ADPA designation of Certified Configuration Manager, CCM NO: 97.

In lieu of flowers, the family ask that donations please be made in memory of Mr. Sherwood Gordon to the Wounded Warrior Project.

To order memorial trees or send flowers to the family in memory of Sherwood Charles Gordon, please visit our flower store.