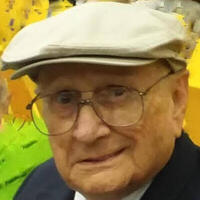 On January 2, 2021 Warren “Roger” Jamison Sr. passed away peacefully in his Edgewater home surrounded by family. Roger was born in Red Lion, PA on January 11, 1932. He attended the Baltimore Polytechnic Institute and then enlisted in the Navy where he served as an Aviation Machinist’s Mate Petty Officer 3rd Class from 1951-1955. While serving his country he met the love of his life Rosemarie in 1953. Three years later they married, and one year later had their first of six children. While working full time and now the father of five, he received a BS degree in Marketing from the University of Baltimore in 1964. He had a long career in the Automotive Service Industry which involved moving between Maryland and Virginia several times.

Roger was known for his great sense of humor and captivating almost anyone with his stories. He loved going to his children’s and grandchildren’s events and was one of their most avid cheerleaders. He enjoyed working with wood, fishing and watching the O’s. And when Jeopardy was on, if you called him, he’d ask you if you knew what time it was, but in a lighthearted way.

Roger was an active member of St Edwards Church and The Knights of Columbus. He will be deeply missed by his family, friends and all who knew him.

He is survived by his wife of 65 years Rosemarie, sons Brian & his wife Shari, Rip & wife Carole, Paul & wife Kim, Joe & his fiancé Leslie Medlock, daughters Corinne Cook, Maria Demma and her husband Frank. Roger is also survived by 18 grandchildren and 20 great grandchildren. He was predeceased by his parents Clarence and Edna Jamison and sister Rita Miller.

A visitation will be held at Beall Funeral Home in Bowie, MD on Sunday, January 10, from 2-4pm. All COVID safety precautions will be in place. A funeral Mass will be held on Monday, January 11 at 11am at St. Edwards Church in Bowie, MD. Internment will be at 1 pm at Lake View Memorial Park in Sykesville, MD. In lieu of flowers, the family would appreciate memorial donations made “In Memory of Warren Roger Jamison Sr” to travismanion.org or stjude.org.

To order memorial trees or send flowers to the family in memory of Warren Roger Jamison, Sr., please visit our flower store.